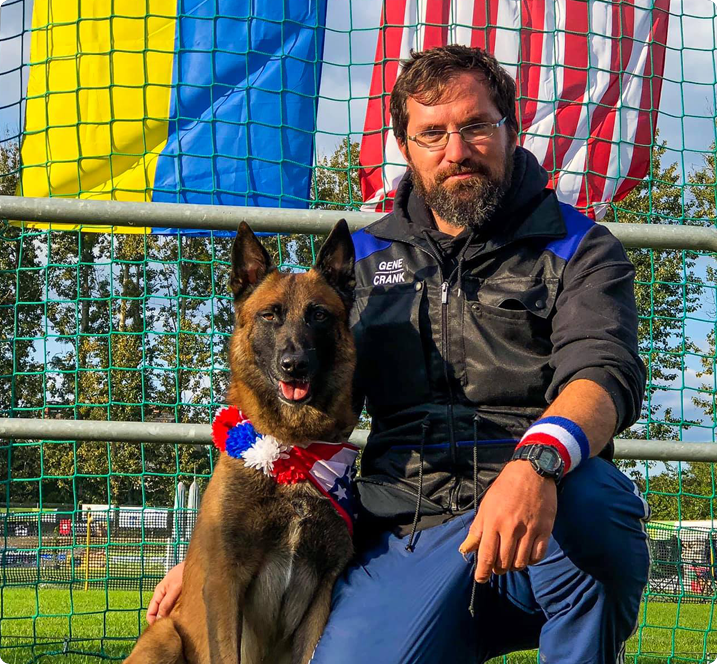 After graduating from North Carolina State University in 2005, armed with a BA in political science, our founder, Gene thought he would go into the field of medicine. After taking many of science courses and gaining even more paper qualifications, Gene realized it wasn’t the right path for him.

Gene’s journey truly began when he and his partner Jennifer Gonzalez bought a half-German Shephard half-Malinois named Zebu off Craigslist for $120. While Gene had been surrounded by dogs his whole life, Zebu was different.  From puppyhood, Zebu was more nervous, fearful, and prone to anger and aggression than any other canine Gene had owned previously. While Zebu was a driven dog and easy to motivate through food and play, Gene knew he had work to do.

Zebu’s more troubling mix of traits led Gene down a long road of dog behavioral training exploration. His life’s purpose slowly took shape. He started training Zebu for Mondioring, a multidiscipline dog sport fusing high-level obedience with jumps and protection. While Mondioring began as a hobby for Gene, it quickly evolved into something more serious. Gene realized that he was driven to win and it became clear to him that, as much as he loved Zebu, competing in Mondioring at a high level wasn’t in the cards for him due to his temperament.

Crank Ot Vitosha was bred in Ivan Bablabanov’s (2x IGP World Champion) kennel breeding program. It’s important to note that getting a puppy with high working potential like this requires you to either be very lucky, well-accomplished in the dog sport world, a reputable breeder, or at least vouched for. Thankfully, Gene had the latter in his favor, making the program comfortable enough to place Crank with him.

So, why was the dog named Crank? It was largely because of his biting style. “Crank” is also a slang term for methamphetamine, which captured his energetic personality.

Using the lessons he learned with Zebu and his year of pet-training experiences, Gene travelled to the USA with Crank for training and trialing. The result? They became the fourth team in U.S. history to achieve a perfect score of 200 in Mondioring Level 1, as well as the first to do so in a single trial attempt. The duo quickly soared to Level 2 status and, eventually, obtained the coveted Level 3 title.

It was in 2013 that Gene officially started training, taking from major training influences from the likes of Ivan Bablabanov and Michael Ellis, and he’s never looked back since. Since then, Gene has trained over a thousand canines to reach advanced off-leash obedience in board and train settings. He’s resolved countless canine behavioral issues and shown clients how to lead better lives while increasing their dog’s overall happiness.

Gene’s results-driven approach, underpinned by values of honesty, integrity, and treating dogs as beings with feelings, is a unique stance compared with the age-old concept of dog training. Gene gets the owners involved in the training to make sure they can confidently implement and sustain what they are learning alongside their dogs for years to come. By choosing to work with us, your dog will be in great care and you will both enjoy the experience and outcome.

Crank is a high-energy canine with a personality that’s impossible not to love. Crank won the 2019 USMRA Grand National Mondioring Championship, reaching a goal that was set before he was even was born. This huge milestone qualified him and Gene to compete in Poland’s 2019 FCI Mondioring World Championship, an honor that was jeopardized when Crank suffered an injury the week before the competition. Sadly, this injury spiraled into an early retirement for Crank, but it wouldn’t rob him of one last chance to shine in the spotlight at the World Championship, where he gave one last epic performance and ranked 10th in a group of over 60 of the most highly trained dogs on the planet. While COVID cancelled the 2020 FMBB World Championship, Crank and Gene did qualify for the team. Now, Crank is a training helper and ambassador for the company. 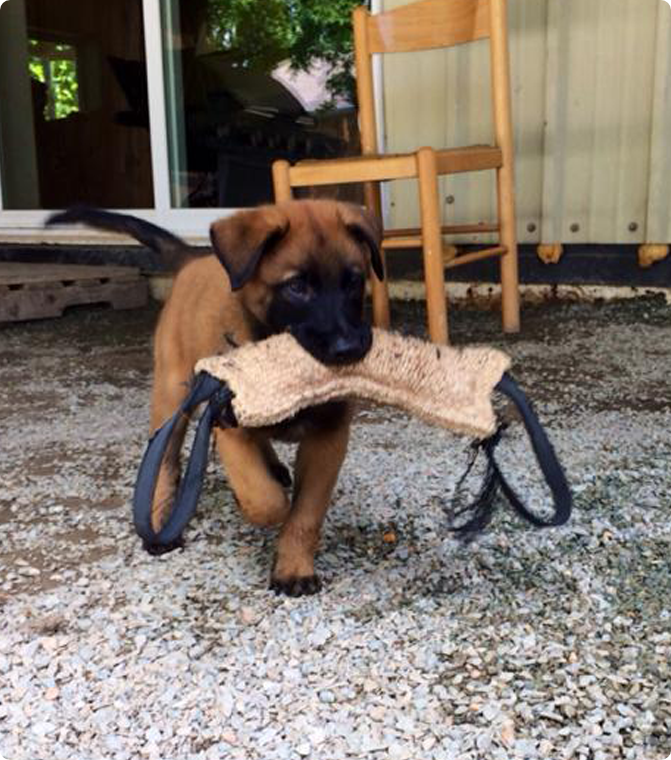